The Lord of the Rings by J.R.R. Tolkien (1892–1973) was published at a time when the threat and talk of nuclear annihilation had first spread over the world. Many speculated that Tolkien’s “ring of power” was a metaphor for the atomic bomb, but Tolkien rejected that interpretation of his work: “Of course my story is not an allegory of Atomic power, but of Power (exerted for domination)”

Lord Acton–also a Catholic–is best known for one memorable phrase: “Power tends to corrupt, and absolute power corrupts absolutely.” The Lord of the Rings is a parable of corrupting power. Tolkien wrote, “You can make the Ring into an allegory of our own time, if you like: an allegory of the inevitable fate that waits for all attempts to defeat evil power by power.”

Tolkien strongly opposed the power of the state which made everyone’s life and property the business of government. He wrote: “My political opinions lean more and more to Anarchy . . . . The most improper job of any man . bossing other men. Not one in a million is fit for it, and least of all those who seek the opportunity.” In another letter, Tolkien referred to “the claws” of England’s “Taxgatherers.” His complaint was both general and personal, as when he noted that the state had taken “all my literary earnings until I retired.”

Considering the depth of Tolkien’s distaste for government and rulers who imagine themselves fit “boss” other people around, it is not surprising to find his views on government into his great Lord of the Rings epic.

Of all the strange folk we encounter in the books: elves, dwarfs, men and so forth, the one group Tolkien most identified with were the Hobbits of the Shire.

In the prologue to the Lord of the Rings, Tolkien explained:

“The Shire at this time had hardly any ‘government.’ Families managed their own affairs. There had once been a King to whom they attributed “all their essential laws; and they kept the laws of free because they were the Rules (as they said), both ancient and just.”

The only real official in the Shire at that time was the mayor whose duty was to preside at banquets and to manage the shire messenger service and the watch. The watch consisted of a dozen or so “Shirriffs” which were “more concerned with the strayings of beasts than of people.” A larger body, “was employed to ‘beat the bounds,’ and to see that Outsiders of any kind, great or small, did not make themselves a nuisance.”

At the close of Tolkien’s epic, there was a new and good King, who lived far away and did not meddle in Shire business, nor ask any tribute beyond friendship.

Of course it’s only a story, but Tolkien, looking back at his creation was proud to say: “I am in fact a Hobbit (in all but size).” 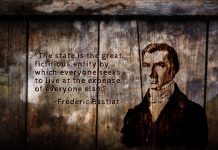